A CRITICAL ANALYSIS OF CORPORATE SECRETARIAL PRACTICE IN NIGERIA 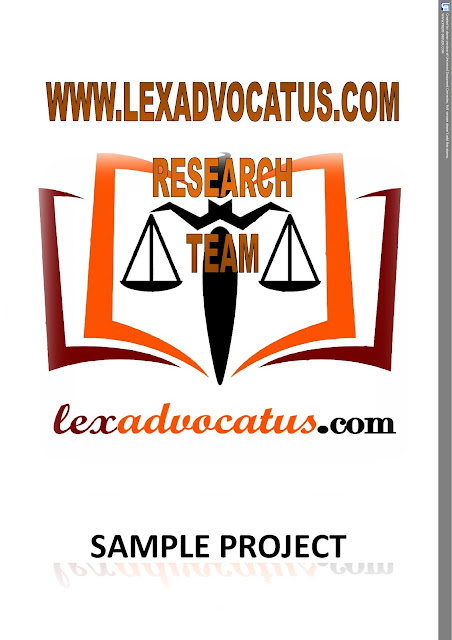 A CRITICAL ANALYSIS OF CORPORATE SECRETARIAL PRACTICE IN NIGERIA

BEING A PROJECT SUBMITTED TO THE FACULTY OF LAW,
DEPARTMENT OF BUSINESS LAW. IN PARTIAL FULFILLMENT OF THE REQUIREMENTS FOR THE AWARD OF THE BACHELOR OF LAWS (LL.B) DEGREE OF THE
RIVERS STATE UNIVERSITY OF SCIENCE AND
TECHNOLOGY, NKPOLU-OROWORUKWO,
PORT HARCOURT.

I, IMABIBO, IWORI ANDY, with Matric No. De: 2008/1902, do hereby declare that this research work was carried out by me. It is therefore an original work of my effort.

CERTIFICATION
This is to certify that this project work was deligently and successfully carried out by IMABIBO, IWORI ANDY of the Department of Business Law with Matric No. DE. 2008/1902 under the erudite supervision of Barr. E. Wosu of the Faculty of Law, Rivers State University of Science and Technology, Port Harcourt.

I dedicate this work to God Almighty, whose Grace was more than sufficient for me during the research.

ACKNOWLEDGEMENTS
My utmost gratitude goes to the Holy Spirit, for strengthening and quickening me.
To my loving Pastor, David Ibiyeomie, who never ceases to declare success in all I do, I say a big thank you.
To the best parents in the world, Mr. & Mrs. Imabibo, I.A., I say thank you for encouragements, prayers, and trust.
To my best friend, brother, in-law, Innocent D. Akeme, I say a big thanks to you for being the best.
To my “daughter” Ibiso Akeme, who always comes to my room to disturb me, I say thanks.
To Betsy, Lolo, Lami, Larry, and Jerry, words cannot express my gratitude, but I sincerely appreciate all your efforts towards my academic pursuit.
And to my Uncle, Mr. Telima Adolphus, thank you very much. To my legal mentor and instructor, Blessings Vic-Jumbo (Esq.) thank you very much.
I remain greatly indebted to my supervisor, E. M. Wosu Esq. for trusting and directing me. You are the best, sir. God bless you.
Thanks to all my friends, we made it.

3.7   REMOVAL OF A COMPANY SECRETARY
Secretaries, being officers can generally be removed in accordance with the terms of their contract. However, provision has been made to safeguard the tenure of office of secretaries of public companies to ensure that they can effectively protect the interest of shareholders and the public by ensuring strict compliance with the rules.
Whilst the secretary of a private company may be removed like any other officer of the company, subject of cause, to any contract of service, the removal of a secretary of a public company is regulated by the Act.[81]
By this it is obvious that the tenure of office of secretaries is protected from victimization.[82]
Sometimes, a company secretary is also the company’s legal adviser. In Daily Times (Nigeria) Plc V. Akindiji[83], it was held that where a company secretary holds a dual position in the company as the company secretary/legal adviser, the mere fact of this duality does not remove the position of the company secretary from being protected by Section 296 of CAMA.   Also the other role as legal adviser becomes protected by the armor that shields the company secretary’s status.
Thus, apart from the provision of the Act on the procedure for the removal of a company secretary, a managing director does not have the power to remove the secretary[84], the court also has no right to remove the secretary, but may restrain him from performing the duties of his office and may also direct that his removal be considered by the general meeting.[85]

CHAPTER FOUR
DUTIES, POWERS AND LIABILITIES OF A COMPANY SECRETARY
4.0   INTRODUCTION
The changed status of a company secretary to that of a high ranking officer, situate third on the ranking of the officers of the company has bestowed upon him certain duties and powers,  breach of which would incur liability on his part.
Thus, in this chapter, we shall be looking at the duties, powers and liabilities of the company secretary in contemporary corporate governance.
Also, since it has been earlier stated in the preceding chapters, that the efficiency and effectiveness of the company is so much dependent on the company secretary, we shall take a quick glance at the role of the company secretary in Nigeria, and compare it to that in selected few jurisdictions.
4.1   DUTIES OF A COMPANY SECRETARY
Before examining the duties of the secretary, one preliminary though important point should be made. By the provision of Section 294 of CAMA, anything required to be done by or of a director, and the secretary cannot be validly done by either of them even if he acts in dual capacity. If there is a breach of this, it is tantamount to a breach of requirement.
The duties of a company secretary are stipulated in Section 298(1) of CAMA which provides that: the duties of a secretary shall include the following:
a)   Attending the meetings of the company, the board of directors and its committees, rendering all necessary secretarial services in respect of the meetings and advising on compliance by the meetings with the applicable rules and regulations.
b)  Maintaining the registers and other records required to be maintained by the company under the Act; and
c)   Rendering proper returns and giving notification to the commission required under the Act; and
d)  Carrying out such administrative and other secretarial duties directed by the directors or the company.
Note the use of the word “include” in the above provision. It is to the effect that the list is not exhaustive. Aniagolu, J.S.C recognized this fact when he stated authoritatively in Okeowo V. Migliore[86] that “Apart from certain statutory duties … the duties of the secretary of a company are not fixed by law”. Indeed in the Act itself, there are other specific duties assigned to the secretary, such as the signing of the annual returns[87]  and verifying the statement to be submitted to the official receiver[88]. Also, by Sec. 66 of CAMA, the secretary may also be assigned other responsibilities as an officer of the company either by the General meeting, the Directors or the Managing Directors.
Be that as it may, there are certain duties which may not be performed by the secretary. A secretary while performing the duties appropriate to the office of the secretary is not concerned with the management of the company that being the responsibility of the directors.[89] Thus, by Sec. 298(2) of CAMA, any duty or power vested in or appertaining to the office of the Directors shall not be performed or exercised by the secretary without the authority of the board. Such include: commencing litigation on behalf of the company[90] or defend a suit in the company’s name[91], call a general meeting[92], or affix the company’s seal to an instrument[93]. Where the secretary is in breach, the company cannot ratify such as they are termed void ab initio.
It is important to state here that the magnitude of the work of the secretary depends upon the various factors such as the size of the company, the nature of its business, and the Will of the directors or the confidence of the directors in the capacities of the secretary. In a small and medium sized company, the magnitude of the work falling on the secretary may be small, but in a big company, in addition to his own secretarial work, he might be required to organize the company’s office, control the staff, and assist the directors or the Board.
4.2   NATURE OF SECRETARIES’ DUTIES
Sec. 297 of CAMA seems to lay down the general rule that ‘a secretary shall not owe fiduciary duties to the company”. As an exception, the Act goes on to provide that “but where he is acting as its agent, he shall owe fiduciary duties to it, and as such shall be liable to the company where he makes secret profits or let his duties conflict with the personal interests, or uses confidential information he obtained from the company for his own benefit”.

Thus, when he is performing any of his statutory duties, or such administrative or secretarial duties as may be directed by the directors, he is not a fiduciary of the company. On the other hand, where he acts as an agent of the company, that is, when he is authorized to act as such under the provision of Sec. 66 of CAMA, he shall owe fiduciary duties to the company not to make secret profits, or let his duties conflict with his personal interests or appropriate confidential information for his own benefit.

Dada[94] opined however, that there is no basis for this untidy arrangement. Why make someone a fiduciary in one breath, and not in another breath? As one of the principal officers of the company, a secretary should generally owe fiduciary duties to the company. This is more so because by his position, he is the custodian of many vital documents and information which he may appropriate for his own use. It has been stated that good faith must not only be shown, but must manifestly be seen to be shown.[95] It would appear that the secretary’s duty of good faith is co-extensive with that required of the directors.[96]
Finally, Sec. 280(5) of CAMA expressly provides that the duty not to misuse  corporate information shall not cease by a director or an officer having resigned from the company, and he shall still be accountable and can be restrained by an injunction from misusing the information received by virtue of his previous position. This is particularly so for a secretary considering that he is usually privy to all the secret and sensitive corporate information of the company[97].

4.4   LIABILITIES OF A COMPANY SECRETARY
The secretary is an officer of the company[99] and may be liable as such and is entitled to relief by the court under section 538 of CAMA. But because he is charged with certain statutory duties, he may be liable for default in performing those duties. Even where he is not specifically charged with the statutory duty, if the duty is one with which he is necessarily involved by virtue of his office as secretary, he may be liable to a fine in an appropriate case as an officer in default which means “any officer who knowingly and willfully authorizes or permits or connives at this default, refusal or contravention…”[100] For example, failure to deliver a return of allotment[101], publish the company’s name outside its place of business, keep a register of directors and secretaries[102] or permit inspection.[103] He is however, not personally liable for breach of trust or misfeasance by directors where he has merely acted in his ministerial or administrative capacity.[104]
It has been established by Company and Alied Matters that the secretary does not owe fiduciary duties to the company as such, but will do so where he acts as an agent, in which case, he will be liable to account where he makes a secret profit or uses confidential information obtained from the company for his own benefit.[105]

S.Ogunche. “The Company secretary in Nigeria”, Published in   the Lawyers  Chronicle …the Magazine for the African        Lawyer.

Email ThisBlogThis!Share to TwitterShare to FacebookShare to Pinterest
Labels: Projects