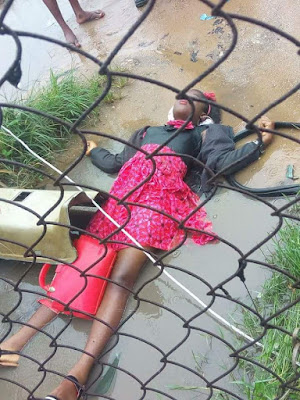 A student of the Rivers State University was yesterday electrocuted by a hightension cable of the PHED somewhere around the school campus.

The student (female) whos body was found lying lifeless close to the schools maingate shuttle park died while trying to move across an erosion after a heavy rain that started in the early hours of Tuesday.

Our correspondent spoke to an eyewitness. According to him "the erosion she was trying to get across had a hightension wire in it as a result of a pole that fell yesterday (Monday 12th), the Deceased had no idea there was a wire in the water."

Our correspondent also gathered that men of the PHED was contacted on Monday, the day the electric pole fell but all efforts to get them address the situation had seem fruitless.

The total number of reported students death cases on campus has been summed up to three (3) since the beginning of the semester in the Rivers State University, Port Harcourt.
Posted by Brainiack at 01:08