XENOPHOBIA, THE LEGACY OF APARTHEID RULE IN SOUTH AFRICA   by Prince Awari 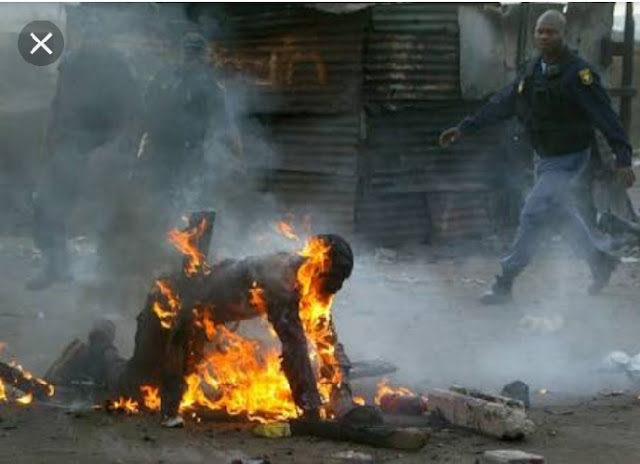 Xenophobia although has it's denotative meaning,in the present day South Africa seem to mean the continuous apprehension of the evil of the past in the present. This still will not be accepted as an excuse for the merciless killing of other Africans especially Nigerians. It is completely a senseless idea conceived in the mush of decayed and farmented brains, and by those who have refused to meet with reality and saddle them selves with creative notions.

It falls to the ground a defence that the reason some South Africans kill other Africans in South Africa is that they are involved in drug trafficking, they compete with them over their women and take away their scares jobs etc. This excuses are nothing but the slogans of loosers.

Trevor Noah testifies that white in South Africa make about 8.9% of the population and controls over 85% of the wealth. There are about 6000 European Families who own over 85% of the agricultural lands in South Africa.(a minority white controlling the wealth as the minority white controlled the government during the apartheid rule) To corroborate these, World Bank recorded that the country with the worst world inequality is South Africa were the the bottom to 60% of South Africans collectively controls 7% of the country's asset. Jason Beaubien in his article noted that the poverty level in South Africa is getting worst, this is due to foreign dominance of the economy by the Europeans. The question then is who is the enemy? Is it the the European who are investing in the economy, or the Africans who are in South Africa struggling to make ends meet and who do not control up to 0.1% of the wealth or the South Africans who would not through their government or creativity improve the welfare of it's citizens. If the majority of the poor in South Africa is able to solve this riddle then they may be able to apply themselves to a more fruitful and lucrative adventure.

It is a foolish idea to think that you can survive only when you kill other Africans in your country in a bid to scare them away. It is in fact sheer corwardise to attack a people that will not fight back on flimsy excuses simply because they are in your country. The corward in these South Africans will not let them defeat their fears. The fears they have carried over from the past, the fears of confronting and competing with the European over Lord who they see today as the representation of the apartheid power that will not bend. The present day apartheid is not in the dominance of government or the promulgation of laws to separate the sheeps  from the goats, but the throne which the Europeans occupy in the mind of these South Africans who see them as gods. Of course no one can compete with the gods since the gods are all knowing right?.

It is unfortunate that what makes South Africa one of the super powers in Africa is the economic dominance of the Europeans and the indigenous white. It therefore means that at the least confrontation of the dominoes they will suffer one fate, the fate of total collapse, recline and retreat into the abyss. Hence the reason of aggression against other Africans as a means of escaping the reality of the power of creativity. The actions of these South Africans gives them out as weak minded people and it's an exhibition of the character of a slave controlled by some kind of remote, a show of shame and a betrayal of themselves and Nelson Mandela who would give his life for their freedom. It is at this point clear that despite external aid they have not and may not be able to break free from the chain of apartheid and the consequences thereof.

It is at this point pertinent to remind these South Africans that during the apartheid rule Nigeria played a prominent role by supporting the Anti-apartheid movement including the African National Congress (ANC). The then Prime Minister Sir Abubakar Tafawa Belewa was the first to provide a direct financial aid to ANC from early 1960 and also funded the Pan Africanist Congress (PAC) and ANC in 1970. General Obasanjo's administration provided $3.7 million plus his personal contribution and the contribution of the members of his cabinet including the members of the Nigerian civil service and students who had to skip meals to be able to make a contribution to the tune of $10.5 million in the first six-month in June 1977. Nigeria lost over $41 billion Because they would not sell crude to the South African white minority government. The monies contributed by the Nigerian government and Nigerians benefitted hundred of South Africans who came to study in Nigeria for free. This and many more Nigerians and Nigerian government did to support South Africans during the apartheid struggle. It is thus ungrateful for South African to treat Nigerians like some pigs roaming the street.

A right thinking person faced with such fears would try to understand the secret behind their success and put up a fair competition rather than engage in baseless war fare which brings no learning. It is important to note that the South African government have a great role to play in ensuring the security of the people in it's country and the welfare of it's people, unless they are hiding behind the African job snatcher scene to cover up their inadequacies.

Jason Beaubien
The country with the worst world inequality...
Not.org/section/goatsandsoda/2018/04/02/59886466/the-country-with-the-worst-word-inequality